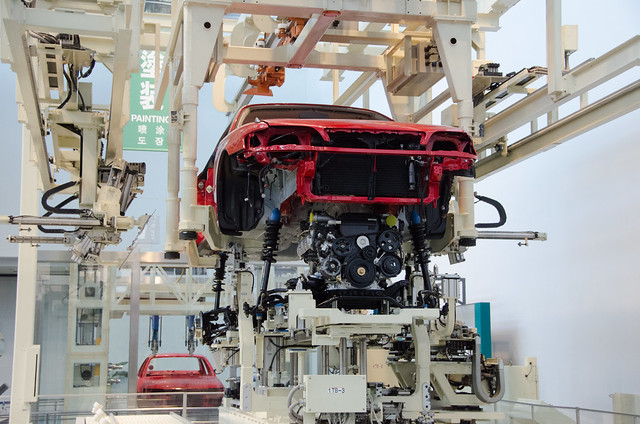 November saw a 19.6% decline in car manufacturing in the United Kingdom, with 31,551 fewer vehicles being produced when compared to the same month in 2017.

Last month in the UK just 129,030 cars were constructed, and the Brexit issue, including the possibility of a no-deal exit for the UK from the European Union, has been blamed for the downturn by the Society of Motor Manufacturers and Traders. Home market production fell by 1.9 percent, with just 23,809 cars ending up in British showrooms.

The SMMT’s chief executive, Mike Hawes, calls the November decline for cars manufactured in the United Kingdom “very concerning” and suggests that the output has been seriously impacted by a loss of consumer and business confidence in conjunction with some flagging export markets.

Hawes says that with Brexit looming ever closer, certainty is a must for the automotive industry, and there must be no possibility of a “no deal” Brexit. Thousands of jobs in supply chains and car factories in the United Kingdom depend on easy, free trade with the European Union and devastating consequences could follow if that trade is stymied or stopped.

1,671,166 motor vehicles came off production lines in the United Kingdom last year, declining three percent on 2016’s record highs, which were its biggest since 1999. Domestic vehicle registrations also declined by 5.7 percent in 2018, and UK market production fell by as much as 9.8 percent. 79.9 percent of the 1.6 million vehicles that were manufactured in the UK were exported – a fall of 1.1 percent in comparison to the previous year – and the largest buyer of such vehicles was the European Union.

The government should reach a post-Brexit deal for the upcoming transition as a matter of urgency, according to the SMMT, which would include the UK maintaining its status as a member of the customs union and single market, and dealing with crucial details that could devastate the competitiveness of the industry if left unaddressed.

Despite a fall in overall vehicle manufacturing, there was actually an increase in engine production in the United Kingdom, which hit record highs with as many as 2.72 million being produced, a rise of 6.9 percent in 2016. Recent investment into low-emission diesel and petrol engines in the nation are responsible for the increase, the SMMT claims, with 3550 of the 8000 people who work in engine production having a direct involvement with diesel production.

The trade body is however warning that the continued uncertainty with regard to the UK’s diesel policy is likely to have an adverse impact on the sector. Overall investment in the automotive sector in the UK has also fallen from £2.5 billion three years ago, to just £1.1 billion last year.

This entry was posted on Thursday, January 24th, 2019 at 7:01 am and is filed under Car, Motoring News. You can follow any comments to this entry through the RSS 2.0 feed. Both comments and pings are currently closed.