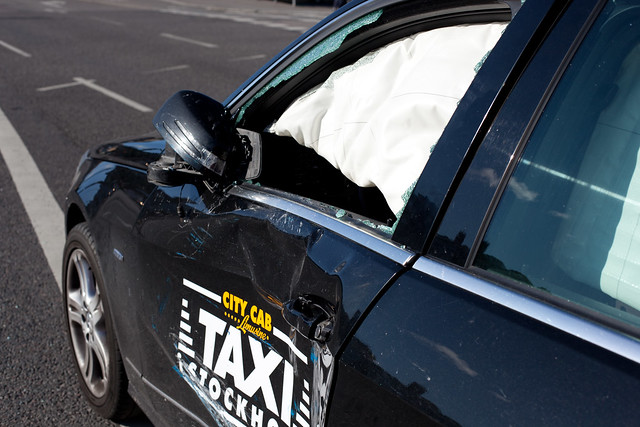 The severity of injuries that result from car accidents could be reduced by as much as 40 percent because of external airbags which inflate from the sills of a car, a leading auto parts supplier has claimed.

The external side airbags from ZF have been designed to serve as an extra crumple zone should a collision take place. They would be able to deploy upwards in order to protect the side of a motor vehicle within mere milliseconds and to absorb the force of another car during side-impacts. External airbags have been in development at ZF for several years now, and while officially still nothing more than a concept, their integration into actual motor vehicles seems likely to be closer than has previously been the case, thanks to the increasing number of cameras, sensors and other crash technologies in existing cars that are already on the market.

The goal of “Vision Zero”

The head of the passive safety systems division at ZF, Dr Michael Buchsner, says that the pre-crash external side airbag concept is an excellent example of ZF’s hope to achieve what it terms “Vision Zero” – a world of easy mobility but without any accidents or issues with emissions – by using new autonomous and all-electric technologies in order to create vehicles that are both completely safe and completely clean. While external airbags are not actually new in and of themselves, with the 2012 Volvo V40 featuring one that actually emerged from the bonnet top of the vehicle, the new concept airbag from ZF is intended to absorb the impacts from other cars.

The timeline of airbags

Airbags and motor vehicles have a long history together, with the former having been first fitted onto steering wheels, which then spread to airbags in passenger compartments and specific airbags for knees, seatbelts and elsewhere. Airbags were first patented more than sixty years ago, back in the 1950s, and their first appearance from a production car’s steering wheel was in the Oldsmobile Toronado, which was released way back in 1973. Next in line for airbags was General Motors, although they were originally intending to use them as a replacement for, rather than a complement to seatbelts.

The first time an airbag featured in a European vehicle was in 1980 with the W126 Mercedes S-Class, which was designed with the intention of it serving as an SRS (Supplemental Restraint System). In 1987 the Porsche 944 Turbo became the first model to ever include airbags for both the driver and passengers as standard equipment, and in the late 1990s knee and curtain airbags also began to rise to prominence.

Airbags in the modern world

In the 21st century airbags are ubiquitous in motor vehicles, and the idea continues to evolve. The current Ford Mondeo and Mercedes S-Class include seatbelt airbags which actually distribute impact forces away from the belt, and the Volvo V40 and the Land Rover Discovery Sport feature airbags that arise from their bonnets in the event of a collision.

This entry was posted on Thursday, December 13th, 2018 at 6:53 am and is filed under Car, Car Accessories, Driving Safety, Motoring News. You can follow any comments to this entry through the RSS 2.0 feed. Both comments and pings are currently closed.